Col du Granon, Tour de Francia 1986, the other story which was not

It was my last chance to win a stage of this Tour 1986, within my qualities as a rider, As was the hardest phase, more possibilities for me, this stage had all the ingredients to try their luck, ahead had the Col de Vars, the Col d'Izoard and the Col du Granon.

I tried from the start getting into all the cuts that were made, niguno was worth and butt, more than 50 km / h on average in the first hour of the race, we reached the first climb and told me I should try on my land, I attacked at the beginning of the Col de Vars and left alone.

Due to the high pace, there was a break in Vars platoon to recover and managed to take much advantage on the rise. After reacted behind other riders who wanted to break the race looking stage far as I, was a group of very good runners behind with Mottet, Strong, Cabrera and other, but within my qualities of good climber-wheeler I kept them at bay with more than 10 minutes ahead. I crowned first the Col de Vars and also the Col d'Izoard, a mythical rise only knew from history that had in the major stages of the Tour, still I had a good lead and I faced the unknown Col du Granon with 140 fighting km solo, a platoon leader broken Tour, Bernard Hinault, It happened already left the group of the best in the Izoard, the race was red, he was concocting a historic day tour of France, from that year until 2015 when I write these lines, He has not yet won any French cyclist la Grande Boucle. 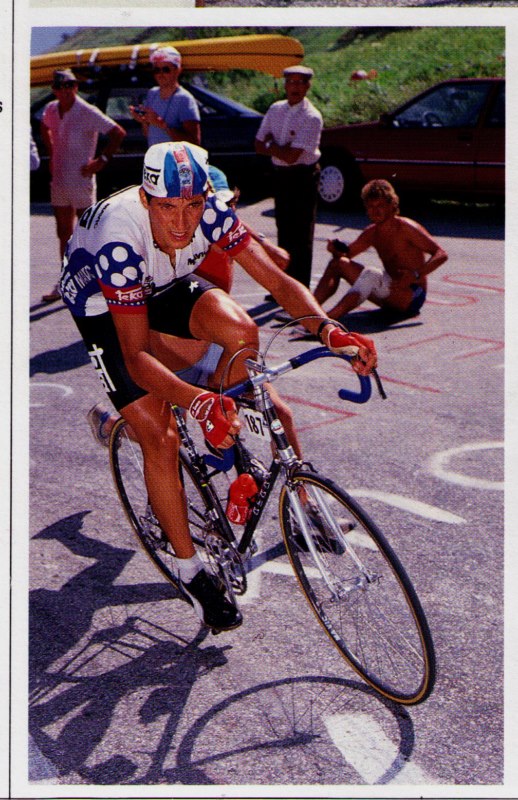 Briancon passage through the foot of the Col du Granon pulled 10 minute my persecutors, I still felt strongly despite the severe beating in my body wearing butt rolling solo. He did not know the rise, but I had heard it was very hard, I prepared a pinion aluminum had special stages with a large crown 24 teeth 39 small dish and began to climb those 12 constant eternal km climb to 10-12% of slope without breaks by a narrow and crowded public road saltarina.

In the absence of 3 km my body said enough, I could no more, He had no power, I had begun to feel the cold sweat that precedes the bassoon, I was in the “pre pájara”, above references were confusing, I did not know what really drew rise and that never ended. In the car, the second director of my team, by Teka, Sebastian Pozo shrieking encouraged me everything I could, but I could no more, and unreferenced advantage of me, we knew that the leader came and left the race was turned upside down. After 2 km with endless suffering streaking the limit of agonized, impotence feeling that he could no longer stand up on the bike, I felt like no passing mourn meters!. 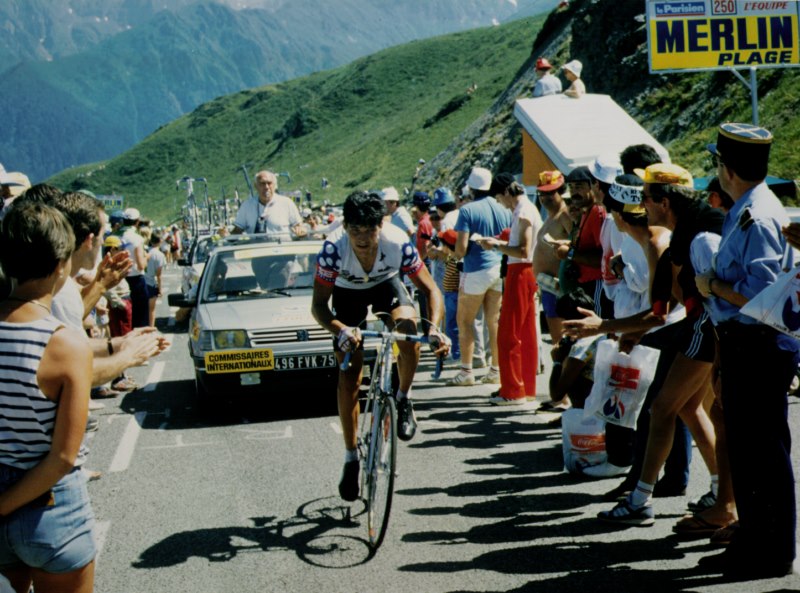 I finally got to bandería last km, !what a suffering, that agony! I think it took me more than 20 minutes to make the last 3 km, still remained very hard climb, He had already been a long time “the book burning” I told myself: Eduardo only are you 5 minutes of suffering, this is done! I finally caught sight of the finish line in a small straight 50 meters, He was hidden, I raised my arms to celebrate the victory that was achieved with a titanic effort, I'd say superhuman. I got a historic feat almost anonymous French embodiment reveled in the suffering of the fallen leader Bernard Hinault and the new star of the Tour that began to shine strongly from this time American Greg Lemon a young man of my fifth with 25 years managed to break the hegemony of the great Hinault.

On top, after passing the finish line I did not realize me feat, only she felt tired and was very hungry, although I was happy to have been able to reach.

As I was recovering I was more aware of what was achieved, I came news that many riders were having a bad to finish, that Hinault himself came KO, She had been beaten, He had succumbed to this great stage. I realized it was going to be remembered for its hardness. I could not guess is that this stage would enter the history of the Tour de France who was dethroned king of the Tour: Bernard Hinault caiman.

He did not know the rise, hardly anyone knew, if the other two were known, Cole Vars and Col d'Izoard had risen in the Dauphiné, but the Col du Granon, after that day still remains the great unknown. However it is a true "HC" out of category, It is a rise of the toughest I have faced in the Tour de France, harder than the mythical Izoard, Col du Galibier, col du Tourmalet, col d'Auvisque and other best-known ascents Tour, it is that at the top there is a ski resort that wants to promote the area, there is only a military base and the road ends at the top, you can only continue on a dirt road. The Col du Granon deserving again in the Tour, sure make a difference again, I wish it did on this stage one of the Tour de France next decade.

I used my usual cycling team Teka, Alan was a carbon frame, the first carbon frames that came, with aluminum fittings where carbon tubes were inserted they were glued, more noticeable stiffness in the aluminum frame that also were using at that time. The group was Mavic at that time with a development of 53-39 on plates and 13-24 in the rear sprocket. Another novelty for the time clipless pedals were the Look brand that started using this year with my team Teka

It was veteran despite my 26 years old, I went professional with the team Fosforera-Zor, with 19 years ended my first Tour of Spain working for my teammate Faustino Rupérez, winner of that edition of the Tour. Then I realized in the years 1981, 1982, 1983, 1984 the Vuelta and the Giro in the same year. In 1985 I changed the Reynolds team to make the Tour and my first Tour. In 1986 I also Vuelta and Tour, so he was used to the hardness of these stages, in fact this kind of stages were the ones I liked, because it is difficult to run a team for the hardness travel, the teams are reduced to a minimum and at the end if you attack in mountain practically those who persecute you make the same effort all up, has only advantage the chasing group on the plains stretches where the escaped must continue to stop and save energy because the leaders will wheel, but teams remain very low in this type of stages and is where he sought my triumphs. Although I confess that stage was the hardest stage that had run so far in my 13 three laps contested. I still had a few to be done, come to play 27 great returns to 1993, ending 26 of them, I think I have finished the record of large laps, I have been a cyclist maximum strength in the three Great.